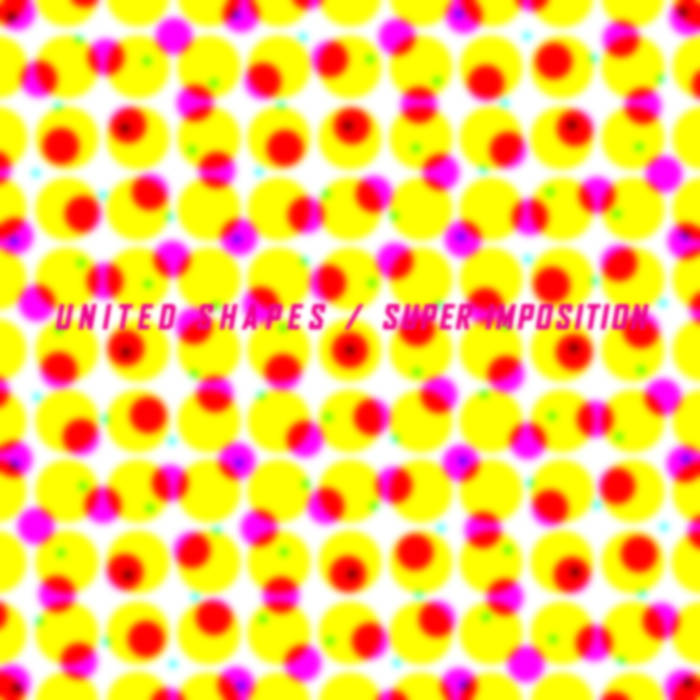 A Review of United Shapes' Super Imposition
by Ramón Ramirez

Joseph Devens is a lonely humanist with a comedian’s intuition. He drinks a lot of coffee. He’s fascinated by teeth. He’s got a thing for a painter named Heather Day. He’s also a Facebook friend of mine and I remember him fondly from semesters spent sharing a stressful and manic newsroom. That’s the disclosure part, because the Web is full of people blogging about their friends. But he’s also a man I haven’t physically seen since, I think, early 2008. As such we’ve spent the Obama presidency as dueling wannabes on mutual timelines. What I’m saying is, hey man, I barely know the guy you said it was cool to invite people. His songwriting reveals him as a torn pragmatist—hungry for a routine but haunted by the triviality of serene relationships. As the chief technician and one half of Austin, Texas, indie rockers United Shapes, he’s a multitasking insomniac that knows rock’s insides. The band’s seventh album, Super Imposition, is loose and full of trap doors: hand-claps, harmonizing, hooks, elastic synths, xylophone pings, and Moneyball trombones. The resulting pop suite is a shoestring delicacy at its highs—but the lows function as revealing digressions. Devens sings as if every line has been scribbled out and rewritten 10 times; he doesn’t let lyrics exist without blowback. He’ll explore ideas, and find the deadpan gag even if it means serving a winking homage to the wonders of Canadian women, or getting voyeuristic and uncomfortable before unmasking himself as a literal vampire. Daniel Johnston without the unhinged finger-painting comes to mind in terms of the homemade-but-ambitious arrangements; ditto Christopher Owens at his most sardonic. But the offbeat puzzles spilled onto coffee tables by duo They Might Be Giants, of the spiraling and bratty alternative rock, seem to act as the most direct descendants. “Weird Weeds” takes a stab at James Murphy’s nerd dance epics (think “Disco Infiltrator”) but doesn’t quite land or pack the muscle. It’s one of the few spots on the record where the apartment engineering and DIY presentation hinders the final file. At its core, Imposition flattens rock tropes and pushes buttons. “Oliver Hitler” follows the narrative structure of Larry Williams’ “Bad Boy” (misfit kid acts up and this is his song), only here the child is a sociopath who hatches schemes and “doesn’t get nervous when he lies.” “Nobody likes that guy,” Devens concludes. The song remains interesting, worthwhile, but not digestible because of its all-in details—you’re taking in the director’s cut, after all. But by the numbers, the record operates with astute efficiency: nothing is longer than 3 minutes and 42 seconds, eight of the songs are strong, six of the songs are richly dense and gorgeous. I admire the band’s disinterest with conventional endings. “Are We Ours?” asks crushing questions but retains its affection for the song’s subject: “Are you filled up with doubt? Are you desperate and down?” “Charlatan” ends with punishing disdain for unchecked hacks: “Any weatherman who goes to weather school can do what you do.” “Raw Honey” is the rollicking smash single—weird enough for college radio, memorable enough with its sweetheart daze to soundtrack a sitcom intro. While Devens spends 13 songs coming in and out of his anxiety-laden protagonist role, he lands on a compelling feminist moment of clarity that sticks with you: “Hey are you a feminist? I’m a human ain’t I, miss? And I’ve got a heart in my chest, so that makes me one I guess.” It’s an album for people that file complaints, sure, but very few individuals are interesting let alone dynamic storytellers when they’re simultaneously working through their shit.